This years Autumn excursion provided plenty of fun and interesting adventure. We returned to a favorite locale, Canyonlands National Park Needles District, for two full weeks of back country travel. Leaving town on Friday October 13th (yikes) we drove straight to Cathedral Butte, a prominent feature positioned at the top of the Salt Creek trail head. First thing Saturday morning we launched on a four day off trail back packing route.

Our route was based on a couple of sources. We had first gotten the idea from an intrepid fellow named John that we met in Capital Reef last spring. We met under funny circumstance and re convened in the campground later to share some beta and mark up maps from our various adventures.

I also found some online info about the route that had a good description and some handy waypoints. This route is not technical but it requires careful navigation, good map reading skills and advanced off trail canyon country experience. Fun and doable but not to be undertaken casually. 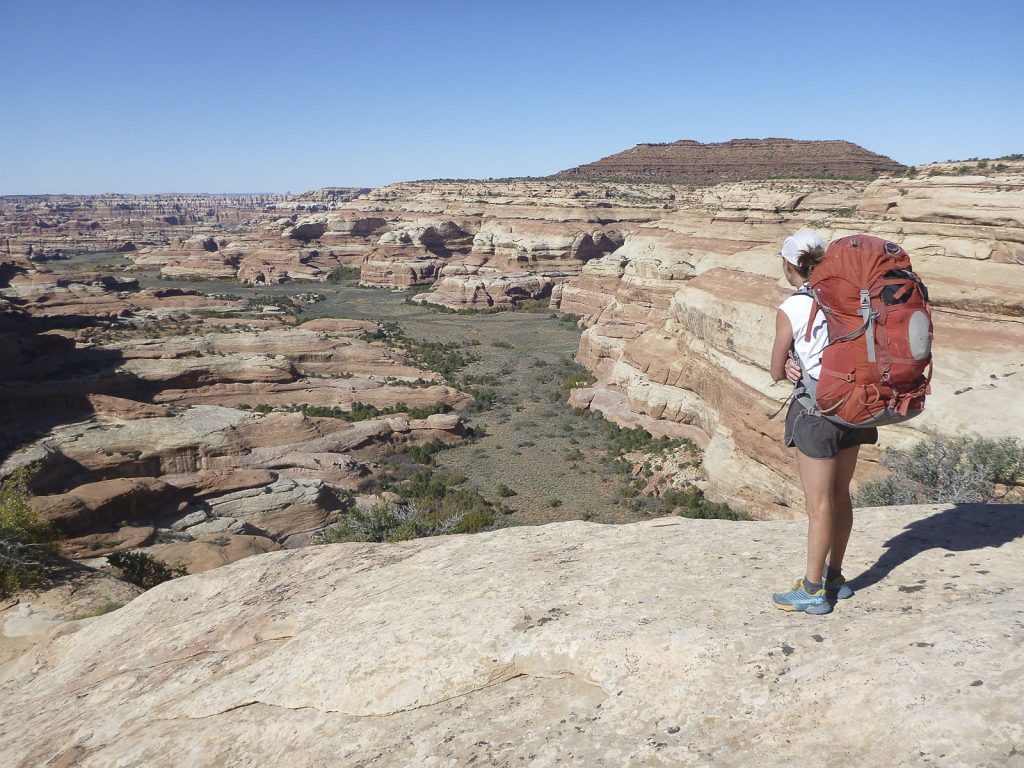 The route went down the Salt Creek Trail to a bit past the historic Kirk Cabin home site. We left the Park Service trail and traced a steep and unmarked slick rock route up and out of Big Pocket. The route then turned generally East and wound around and above the the many forks of the Davis Canyon system. Inspiring views extended down into Davis and beyond as we traveled along on the rim level. 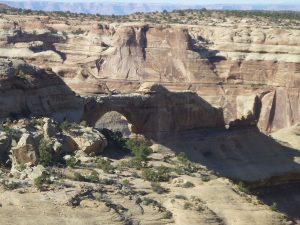 We were not expecting to find any water for the first nights camp and had loaded up with a gallon each before climbing out of Big Pocket. As luck would have it, there was about five gallons in a small pothole under a cool little toilet bowel arch right where we stopped to camp for the first night.

It was cold that night, in the morning our water bottles were half frozen! Mysteriously, all of the water in that pothole had disappeared. No animal tracks around it, just gone. Weird.

The next day we crossed the rest of the rim and descended a side canyon down into Lavender Canyon. Some by passing of pour overs and a bit of pack passing was required. We landed in Lavender just outside of the park boundary. 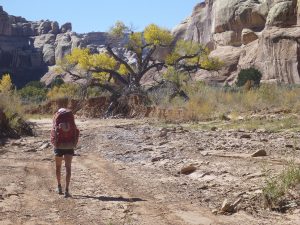 The 4×4 road into Lavender is closed and there is a gate with a trail register at the park boundary. A solo person and a NPS Ranger had signed the register about two week earlier, otherwise it seemed no one had passed for a while. We headed up Lavender for a few miles and stopped for our second night at a nice water source near the mouth of the West Fork.

I was filtering some water and Karen was arranging the apres hiking session when we started hearing the sound of a vehicle coming down from higher up in the canyon. WTF? After a bit a 4×4 ranch type ATV came around the bend. A person on board exclaimed, “There’s some people”. Next thing I heard was , “Hey, it’s Mark Frankmann”.

Suddenly,  three people we knew from Telluride appeared along with the legendary Heidi Redd, Kristen Redd and another hand from the Dugout Ranch. Hah Hah we were not as remote and alone as we thought. Lavender Canyon was part of the Dugout Ranch until the mid 70’s and they still enjoy VIP access, as they should. We had a nice visit and Heidi said it had been 23F that morning at the ranch. We felt honored to have met all of them in that location. 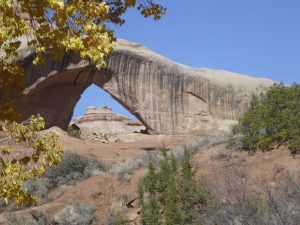 The next day we hiked up the West Fork for an hour or so, then got our backpacks and headed up the main Lavender to another nice water source and campsite. We spent the rest of the day going up to Cleft Arch and beyond. Very nice.

Day three, we went a few miles up the South (East?) Fork and then began the climb out of Lavender. A steep, loose, 800 vertical foot, zig zag around little cliff bands to the rim. We topped out around noon and then hiked the 2-3 miles back to the van at Cathedral Butte.

It was early afternoon and we drove back down the Cottonwood Road. The plan was to drive up the “high clearance” road to the bottom of Davis Canyon and van camp just outside the park boundary. We wanted to spend a couple of days checking out the many pictographs and arches in the Davis Canyon complex. We came to a spot in the road that was a bit too much for the van and we gave up after trying various options. Time to work out a plan B.

We drove into the park and stopped at the visitor center to pick up our permit for the next back backing session. We had 4 days to take advantage of in the meantime, not a problem in the Needles District.

After leaving the visitor center we did a very cool off trail hike that travels along the fantastic slick rock bench below the East side of Wooden Shoe Arch. Navigating from the Cave Springs area over to the long sandstone feature that includes the arch was a little brushy but not bad. Once up on the slick rock, wow. We cruised for hours/miles on a super nice slick rock contour that ended up, with some route finding, putting us down on the Peek a Boo Trail a few miles from the Squaw Flats Campground. We were able to score a campsite for one night and in the morning moved over to another site for three more nights. 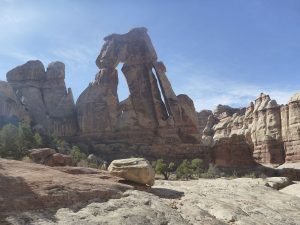 The next morning we did the 11 mile round trip out to the Confluence Overlook and back. Following that we hiked the long loop to Druid Arch. 18 miles of non stop stunning scenery. We’d done it before but it had been a while and that is, for my money, one of the all time great hikes anywhere. Finally a bit of a rest and recovery day. We spent an hour or so checking out Cave Springs and used the rest of the day to get cleaned up and organized for the next back packing mission.

We had the next two nights arranged in the designated sites in Lost Canyon. We got over to Lost Canyon site #2 about noon via a back door off trail variation John had turned us on to. We spent the rest of the day hiking up into a side canyon that we would be re-visiting. In the morning we moved up Lost Canyon a mile or so to Lost Canyon site #3. We dropped our packs and spent the rest of the day going up the right fork of Lost to it’s end. Great hike, lot’s of bear tracks and old bear poop. A couple of sweet arches at the end. 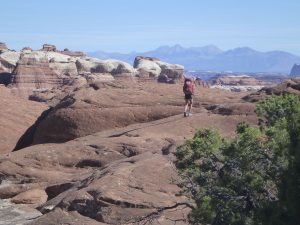 More off trail route finding was in store. John had also shown us a route from Lost over to Salt Creek. It followed up the side canyon we had scouted earlier and then descended another side canyon down into Salt. The park service Peek a Boo Trail is the standard route between Lost and Salt but having been on it several times this was an interesting and seldom traveled alternate.

We hiked up Salt a bit and turned off into an extensive side canyon system. I’ve heard it called a couple of names but it has no name on the map. 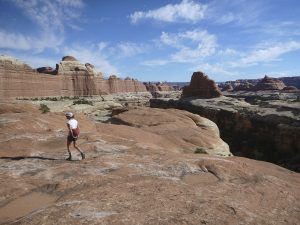 It had been on my radar for years and we finally made it in there. Super nice, very extensive and some available water. We had three sweet days in there and could spend six more easily. We will be going back.

All things must pass and it was time to head home. We hiked back down Salt Creek to Cave Springs and got to the van about 4:30. A night at Hamburger Rock, grocery shopping in Cortez the next day and suddenly, 14 days later, we were back in Telluride. A mighty fine session in the Needles District.

A month after posting the above, we went back to the Needles! We had been plotting a strategy to go back and get into Davis Canyon. Lack of snow and record high temperatures during the Thanksgiving holiday motivated us to make it happen.

We waived off on the previous attempt because the road in was a bit to much for the van. This time we took my truck and car camping package. Old school, but it got us in there and we were perfectly comfortable for 3 nights. 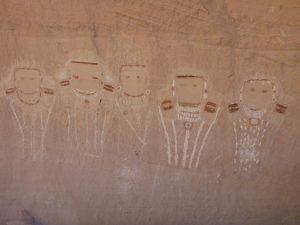 The first day was spent checking out some cool petroglyphs, ruins and the famous 5 Faces pictograph. We walked up to the end of the West Fork, exploring several minor side canyons and bays along the way. We also had time to walk up to near the end of the first principle side canyon in the main fork. Beautiful and fun walking. 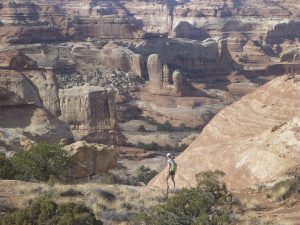 The next day we followed a sneaky and somewhat scrambley route that took us up and out of Davis, across some high ground to the West and over to the head of a canyon that drops into the adjacent Horse Canyon system. A little bit of exposure and quite a bit of route finding was required. This route requires experience in off trail canyon country travel and good map and navigation skills.

On the morning of day 3 we did a short but sweet little hike right above our campsite. An arch, several ruins and cool slickrock, a nice way to wrap up before driving home.

Davis is a large and multi branched canyon system. We spent 2.5 days and barely scratched the surface. We plan to go back and check out the other forks, ruins arches and the rest of what Davis has to offer. We also have a plan to spend a day or two in Horse Canyon.