We enjoyed another fine backpacking trip this spring, launching into the canyon country at the beginning of the third week of April. That’s the middle of “Prime Time” on the Colorado Plateau and a perfect antidote to winter in the mountains. An ongoing home remodel project and a just completed paint job on Karen’s van influenced our plans to keep it simple and reasonably close to home. Plan “A” was to spend 7 days in the Grand Gulch and then move over to nearby Slickhorn Canyon for another 4-5 days.

The Grand Gulch is a large canyon system with multiple side canyons and access points. It’s about 52 miles from the Ranger Station to the San Juan River. 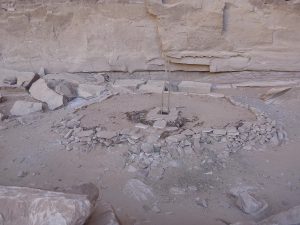 Slickhorn is an adjacent and smaller, but still extensive, canyon system that confluences the San Juan River about 4 miles upriver from the Grand Gulch. Both canyons contain an almost unbelievable concentration of Anasazi ruins and rock art.

First a drive and nice evening van camp near the Kane Gulch Ranger Station where, first thing in the morning, we got the required overnight permits for the Grand Gulch and Slickhorn. 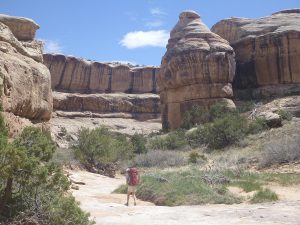 We had previously spent a week in the upper reaches, this time we traveled in the less visited lower section. The drop in point was the Collins Spring Trail Head. Collins is about 18 miles from where the Grand Gulch terminates at the San Juan River River.

Seven days of perfect weather made for a most excellent time. All the leaves were on the cottonwoods, cactus flowers and water everywhere. The ranger told us it was the wettest year in 15 years for the Grand Gulch. We never carried more than a liter of water and we went swimming at least once everyday. 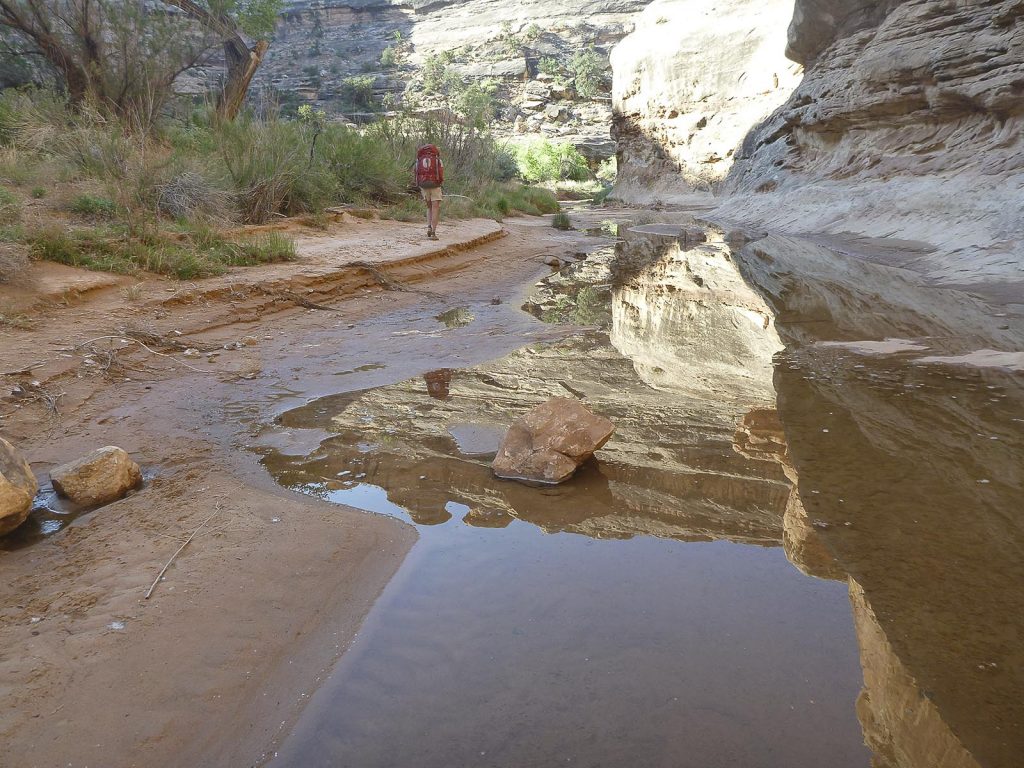 The ruins are more concentrated in the upper end of the canyon but there are plenty of cool sites and lots of rock art in the lower section as well. The quality of walking and camp sites seems a bit more user friendly in the lower. It also seems less visited, especially once you’re more than a days walk below Collins.

We went down as far as Shangri-la Canyon which is about 2 miles above the river. 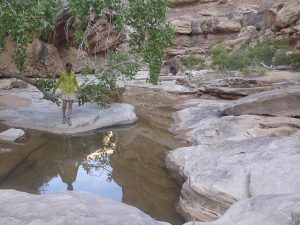 Shangri-la is an informal name for the last major side canyon on the left/East as you near the river. It’s appropriately named! A great day of exploring up Shangri-la (without heavy packs) was pure pleasure.

Overall a sensational trip. 7 days down and back from Collins with lots of swimming, ruins, rock art and side canyons to check out.

Note: It is no longer possible to hike to the San Juan River. A land/rock slide has created an impassable point about 3/4 mile above the river. There is a BLM Notice about this. 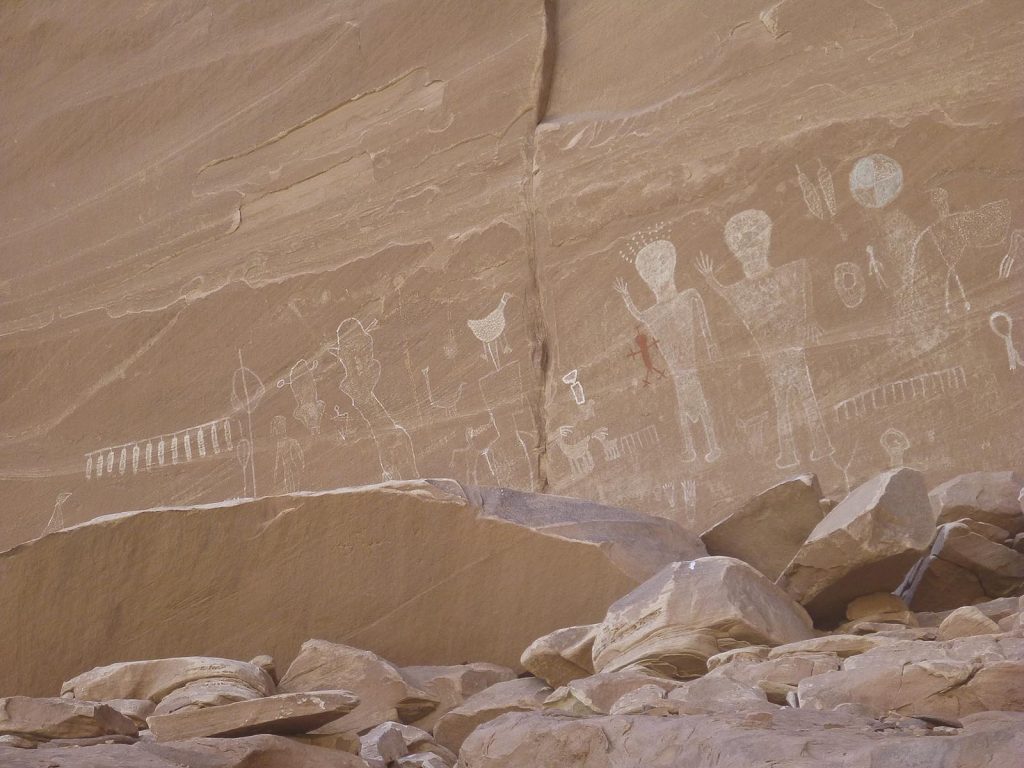 We were noticing a change in the weather as we topped back out at Collins. We already had our permit to drop into Slickhorn the next day but, since  we were driving right by it, we stopped in at the Ranger Station for a weather forecast. Rain, Snow, Snow, Snow, Rain for the next 5 days across the entire Colorado Plateau. Dang, time to consider a plan “B”. So Bail it was…. by unanimous decision.

Plan “B” involved going back to Telluride, getting a couple of powder runs in on the ski area and mainly putting in another week of work on the remodel. After a solid week of stormy conditions the weather cleared and we headed back out to Slickhorn. 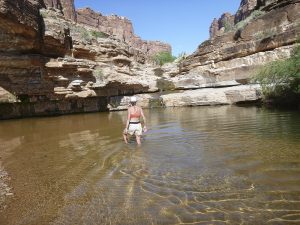 Slickhorn is super cool. More intimate than the Grand Gulch. Nice swimming pools that are especially delightful as you get into the limestone contact layers close river. There are 4 major side canyons that are the access points for Slickhorn. There is some confusion about which one is which. Kelsey’s Hiking Guide to the Colorado Plataeu and the BLM both have a 1-6 on their maps. But the Kelsey #4 is the BLM #6. That side canyon drop in point is also called Trail Canyon. Rod Adkisons Hiking Grand Staircase – Escalante and Glen Canyon has good route descriptions and, per the BLM, calls Trail Canyon #6. 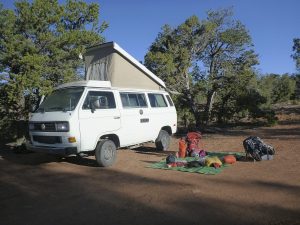 We van camped at the top of #4 right next to a pretty sweet mesa top pit house ruin. The next 4 days were picture perfect. Warm, sunny, all the plants in full leaf and bloom. Lots of water everywhere.

We went down, did a side hike up #5,  and camped at the mouth of #6. We continued down the canyon with a side hike up Kelseys #5 side canyon that come in from the left/East. 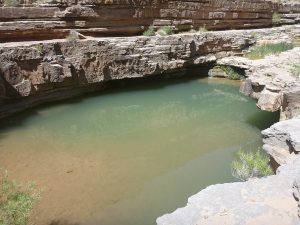 About 2 miles above the river, we dropped our packs at a nice spot with a killer pool and went the rest of the way down to the river with a water bottle, a steri pen and the camera. At this point I had a pretty serious sole de-lam on my shoe. 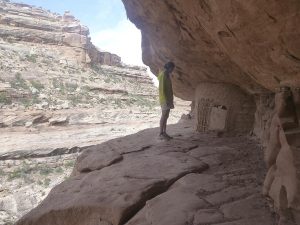 For the third day we hiked back to the mouth of BLM #6/Trail Canyon and camped there again. We took time to drop packs and explore up the remaining side canyon (Kelseys #6). Our final day was up and out BLM #6/Trail Canyon and back across the mesa to the van at #4. We checked out an extensive set of ruins on a big ledge above the canyon and some additional shoe repairs were made along the way. It started to rain just as we were getting back out to the highway. 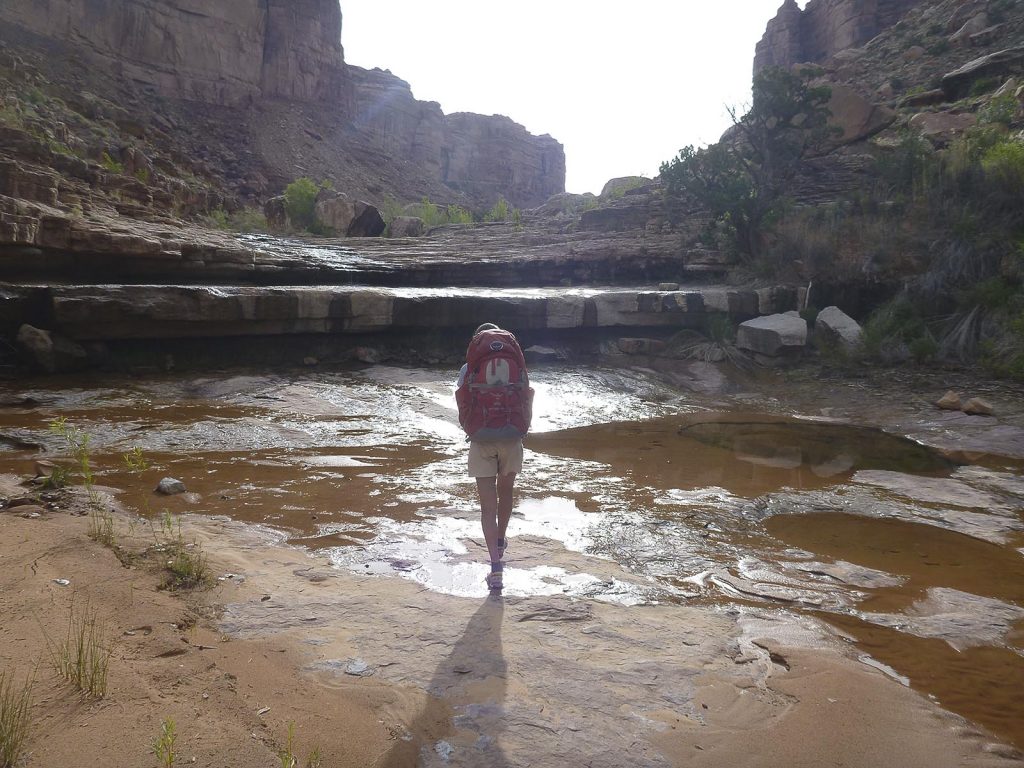 Well that’s a pretty detailed write up but it really only scratches the surface of the experience. Photos never really tell the full story either but here are links to slideshows of my selected shots. Thanks for reading about our trip!