Capitol Reef National Park is a favorite destination. The park is a North-South oriented swath of the Colorado Plateau encompassing the geologic feature known as the “Waterpocket Fold” and it’s surrounding environs.The park headquarters and visitor center is located in the North end at Fruita, UT. Fruita is a historic Mormon pioneer community where extensive orchards were planted in the 1880’s. The orchards are still thriving under the care of the park service and in the fall visitors can pick their fill of peaches, apples, pears, almonds and more. Load up your pack with fresh picked fruit and hit the trails!

The park has a very nice campground and is the least visited of the five Utah National Parks. The established trails are extensive and extraordinarily varied and scenic. Highly recommended.

We left Telluride on the Tuesday after the ski resort closed for the season. Since it was a powder day we skinned up to the top of the ski area for a nice run down the Plunge before hitting the road. 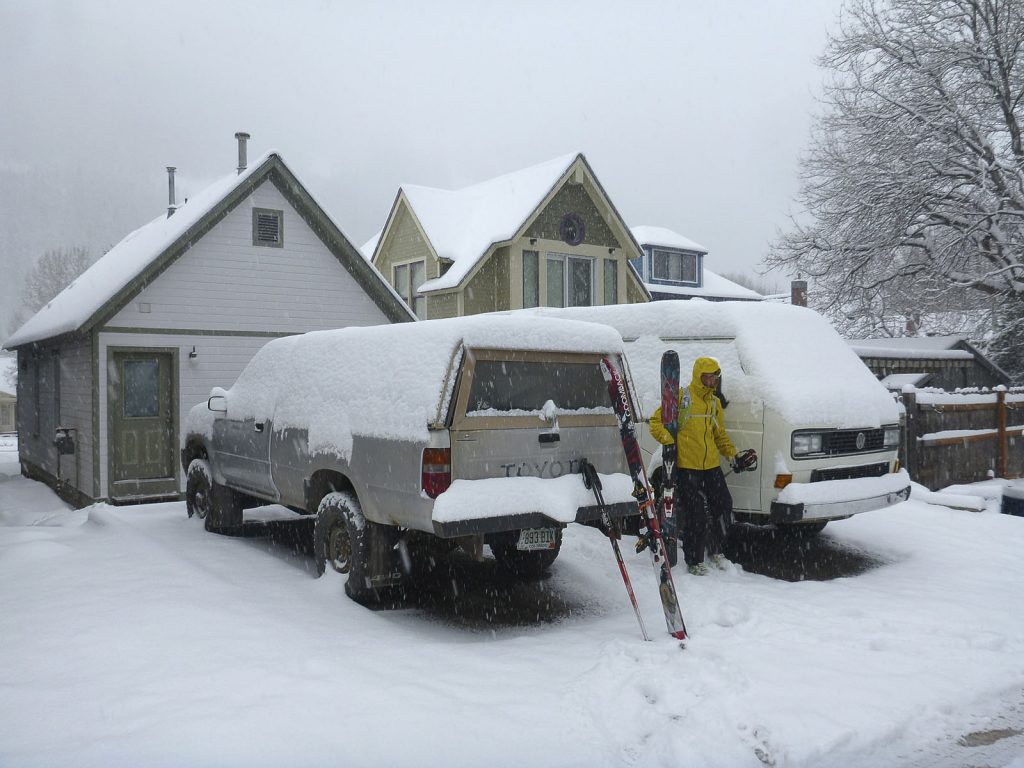 We camped just outside the park on BLM land and this was the scene the following morning. Gotta love the contrast! 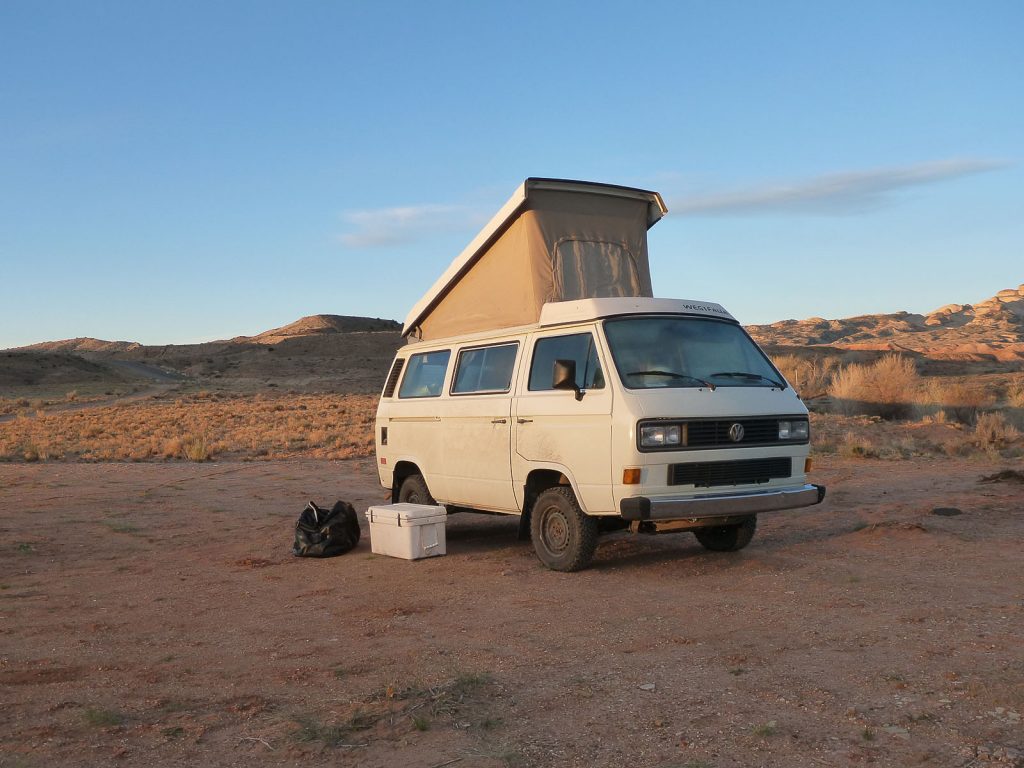 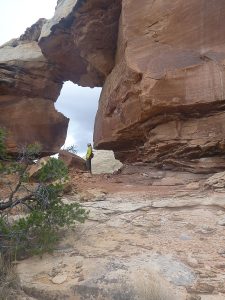 We started with a 3 day backpacking loop up Sulpher Creek, thru the “W” and into upper Spring Creek. Beautiful, remote and some route finding required since it’s a “route” versus “trail”. We included a full day side trip trying to get to “Capitol Point” a remote high point. We fumbled around at the start and got on the route after negotiating some unnecessary class 4 scrambling. The upshot was we figured out how to get started but did not have the time to reach “Capitol Point”. Nevertheless, it was a good hike and a day well spent plus we found an arch not shown on any map.

Next we went on a day hike to one of the prominent sandstone peaks in the park, adjacent to the ones in the photo below. It has a local name but is not named on any map. I’m going to call it “W”. I had been on the summit of “W” before and we had climbed the peak next to “W” that I will call “ND” on a previous trip. Just hiking to the base of these peaks is super fine. You’re off the trail system and in a beautiful slickrock wilderness with almost no footprints, rock cairns or other signs of travelers. The photo below shows some scenery along the way with two unnamed peaks in the foreground and Fern’s Nipple and the Golden Throne in the distant background. (We have summited Fern’s Nipple on a previous trip.) 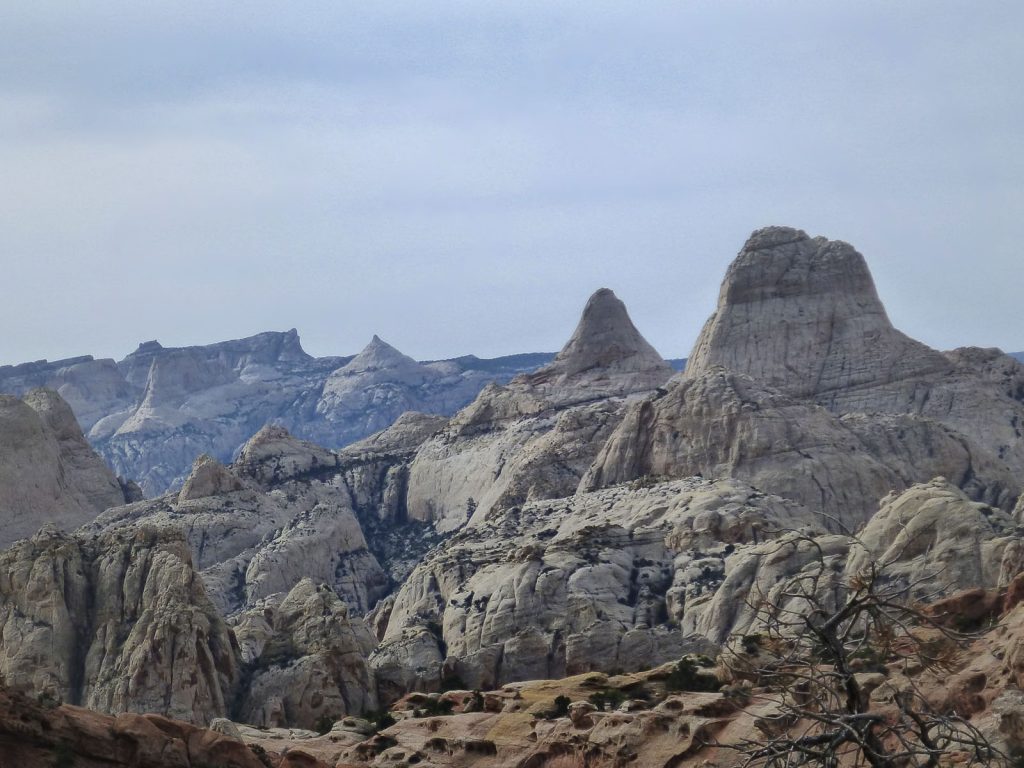 Well, we got to within @ 50′ of the summit of “W” but the final pitch involves class 5 very exposed rock climbing. Too sketchy for us, we needed a lead rock climber. Another high point not attained but another excellent hike with killer scenery and good adventure the entire way. The photo below was taken near the final pitch. 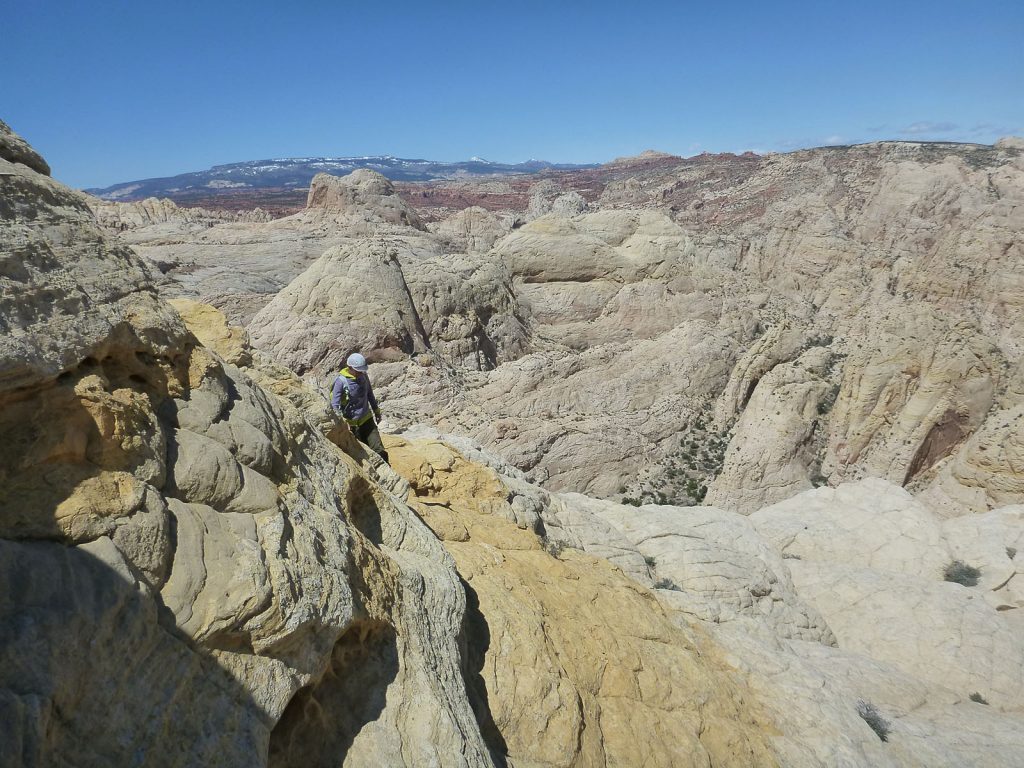 The next day we launched a second attempt to reach Capitol Point. We left mid day and backpacked down to a camp site at the base of the route in Spring Creek. Since we now knew the correct way to begin the route, we left early in the morning and made good progress, up to a point. We’ve done quite a bit of off trail navigating through complex canyon country but this deal seemed to have my number. We got stymied by a relatively small area of highly fractured and cracked sandstone. This area appeared as smooth low angle contour lines on the topo map…not. It was confusing enough to cause me to question if we were on the route. A bunch of map and gps consulting with trying left, right, here and there ensued. In the end we figured it out and it was so simple that I felt pretty stupid. We proceeded a fair distance further but we had lost too much time to reach Capitol Point and still get back with a reasonable cushion before dark. That’s what I decided anyway (others may have felt differently). I figure it to be a 9-10 hour round trip hike from the beginning of the route in Spring Creek. Capitol Point is not going anywhere and we will get there in the future, third times the charm <g>.

Time to move on. We left the Fruita area and headed South down the Notom Road which parallels the Waterpocket Fold’s East facing escarpment. It’s a very cool and seldom visited area. We van camped and spent an excellent day hiking into an area adjacent to where we had done a backpacking exploration on a previous trip. 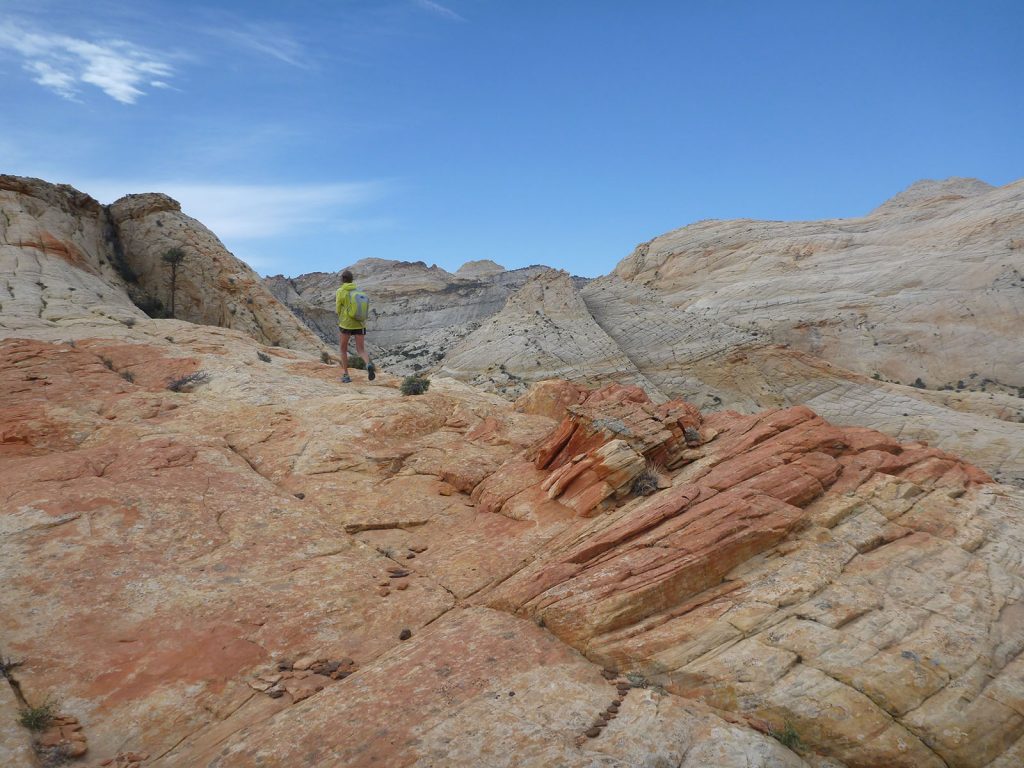 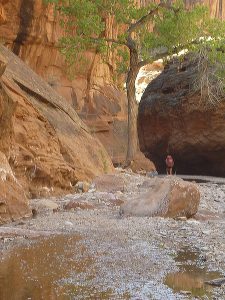 After another fine night of van camping  we continued South down the Notom Road. We turned West at the Burr Trail and climbed up the switchbacks, past the Muley Twist Trailhead (highly recommended) and then onto the secondary Wolverine Loop Road. Our final event was a great three day loop. The first day was spent hiking down Silver Falls Creek to the Escalante River.

The next day it was up and out of Silver Falls, across the high ground of Silver Falls Bench and down into Choprock Canyon. This route follows Steve Allen’s guide book description and requires solid navigating skills. To get down into Choprock you must locate a somewhat hidden set of Moki steps and lower packs down a 50′ section of 5.1 rock climbing. No other way down and too far to go back from where you came. Exciting at the end of a full day of remote cross country travel. 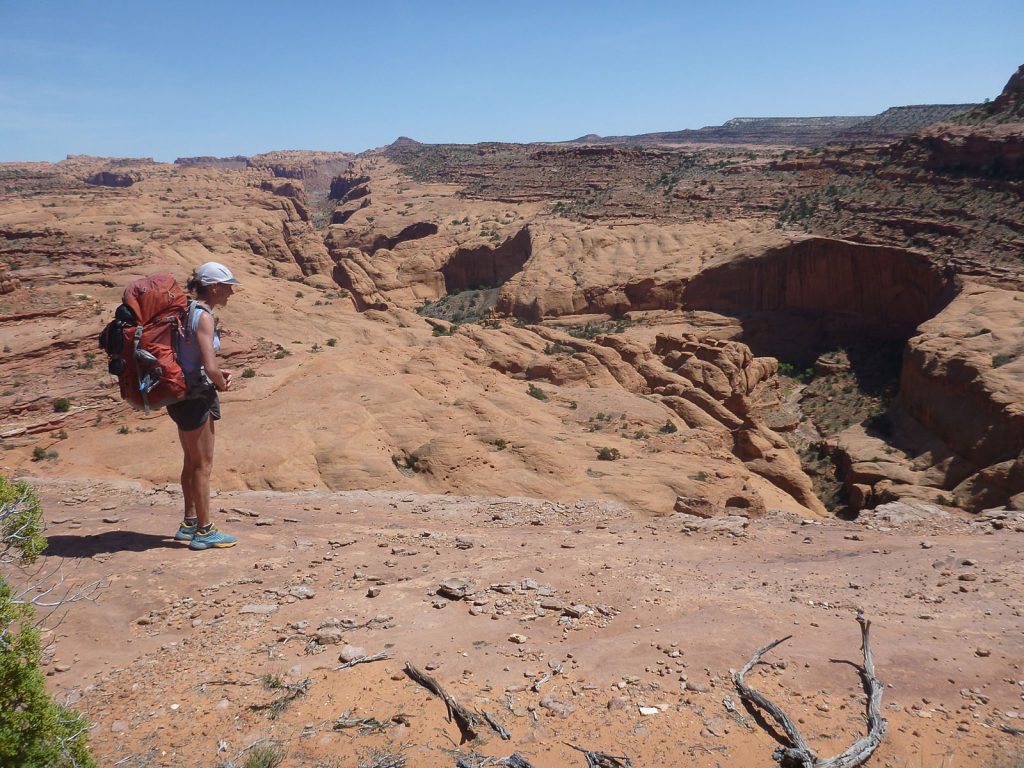 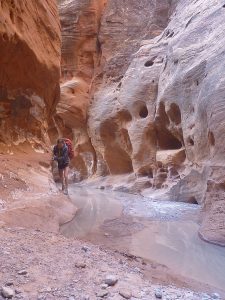 Our final day was spent going up Choprock and back to the van at the head of Silver Falls. The day started with three miles of extra sweet Wingate Sandstone narrows. Wow, I did not realize how fine that was going to be and so very pleasantly surprised! An 8 hour day and tired at the end but super stoked.

Hey, thanks for reading about our adventures. Check out the rest of the trip photos HERE.